[Level T2] .NET Framework provides a set of cryptography services in System.Security.Cryptography namespace. This namespace has been there for years and I have been using some of its classes on and off. Yet, I felt I need to make some research into all the services it provides. And this post is the result.

Initialisation Vector is used for encrypting the first block of data. It is generally not considered to be a secret and can be passed as plain text. However, the same IV needs to be used for both encryption and decryption. More information can be found here.


Performance of these algorithms are compared here (code to re-produce this can be found on GitHub): 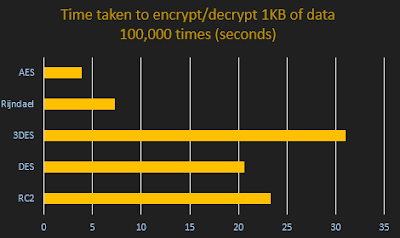 As can be seen, AES and Rinjdael provide the best performance, partly due to the fact that they are purely managed. RC2, DES and 3DES are older algorithms and in terms of security not the most reliable so best to be avoided. So when it comes to choosing between an algorithm, use AES or Rijndael.

HMACSHA1 is a symmetric algorithm but is not used for encryption. This is mainly used for creating hash-based message authentication code which is a kind of signing.

Asymmetric algorithms on the other hand use a public/private key pair. These algorithms can be used for encryption as well as signing. Public key is used for encryption and verifying signatures while private key is used for decryption and generating signatures. So the idea is that the public key is shared publicly while the private key has to be stored securely. X509 certificates are a common type of public/private key pairs and usually installed on the machine's keystore so the operating system (and resource ACL) is responsible for its security.

The most widely used algorithm is RSA which is implemented in.NET framework.

An example of using symmetric and asymmetric algorithms

SSL/TLS is an example of using both symmetric and asymmetric algorithms in the same security context session. In this protocol, client and server negotiate a size for the encryption key (as well as other aspects including the algorithm to use) and then client generates a random secret key of the agreed size for symmetric encrypting the communication. Then it uses public key of the server to encrypt the secret key and sends it to the server. Server, being the only entity in possession of the private key, decrypts the secret key. This secret key is used for the lifetime of the secure transmission to symmetrically encrypt (and decrypt) the data.

Most likely you have used the class Random in the .NET Framework. This class is capable of generating random bytes that can be used as secret keys:
While this code works, Random class is incapable of generating completely random values, i.e. the values it produces are pseudo-random as it chooses from a finite set of numbers.

For producing numbers with cryptography-level randomness use RNG:

Hashing is the process by which a signature of small fixed size is created for a much larger piece of data. Hashing algorithms such as MD5 or SHA can be used to generate such hashes. Hashing algorithms can also use a secret key which can be used while generating the hash. Ability to produce the hash with a given secret key can be used as a sign of the ownership of the secret without having to send the secret. This technique is used in OAuth using HMACSHA1 algorithm. [OAuth2 is different as per @leastprivilege comment. Please see comments]

There are a number of algorithms implemented in .NET Framework. MD5 is best to be avoided and one of the alternatives of SHA algo should be used. In case of a need for key-based hashing, use HMACSHA1.

How to store the secret key of the encryption

We are commonly in need of encrypting pieces of sensitive data and storing them. These could include content of cookies, user sensitive information, etc. For using a symmetric encryption, we need to use a secret key. So where should we store the secret key?

I have seen many cases where the secret key is hard-coded within the code, usually as a string. First of all, such secret keys can be easily retrieved using reverse engineering tools such as Reflector. Also, these strings are commonly meaningful strings, that usually can be guessed easily.

One way to have a secure secret key is to:

Avoid older encryption or hashing algorithms such as MD5, DES, RC2 or 3DES. Use newer and managed-only implementations such as AES, Rijndael (and SHA for hasing). AES provides the best performance out of all symmetric encryption algorithms. Use combination of symmetric and asymmetric algorithms for secure encryption. Use RNG if you need crypto-level randomness.

Special thanks to Dominick Baier @leastprivilege for reviewing this article and posting comments which you can read in the comments section.